on August 26, 2010
Here's my second installment on drafting a sleeve block. The original post is here as part of the ongoing series on drafting featured on Ikat Bag.

When I trace out my sleeve block onto fabric, I like to include the centre and bicep lines, as points of reference when I check for fit. A good fit on the sleeves should locate these 2 lines where you'd like them to lie, following the line of the upper arm (centre line) and parallel to the bicep (bicep line). 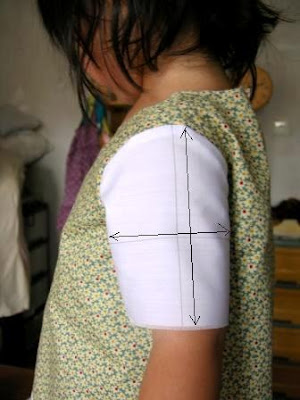 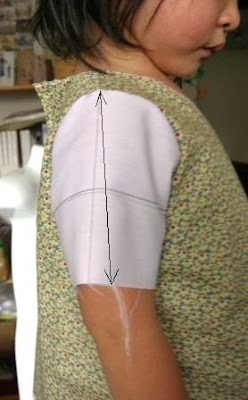 Rubbish - but see where the centre line should lie

If the centre line does not follow the line of the upper arm, this could be due to either of the following reasons (usually!):

If the reason is no. 1:
reduce the width of the sleeve below the armpit by pinching out the excess fabric. Like so: 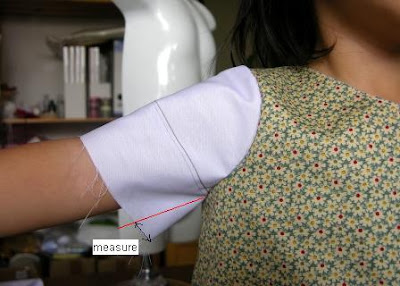 Pinch out only about 0.25" at a time. Do this with the arm raised to ensure you do not pinch out too much causing the sleeve to be too tight across the upper arm when the arm is raised. Check to see if the centre line has been adequately realigned. If it is still misaligned, then assume that the reason is no. 2.

If it is aligned, then measure the amount you have pinched/pinned out at the sleeve opening (only on one side). Redraw the sleeve block, reducing the total width of the opening by the same measurement (say 0.5") on BOTH sides. 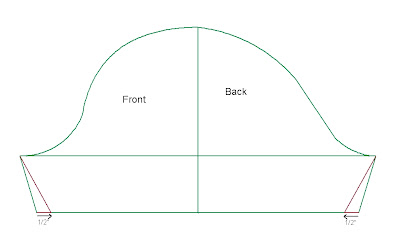 If the reason is no. 2:
just redraft the sleeve block with a reduction of 0.25" (at a time) on either side of the bicep line. Measure again the lengths of each armscye to ensure that there is some ease (up to 0.5") on each scye. (see Steps 22 and 23 in previous post). 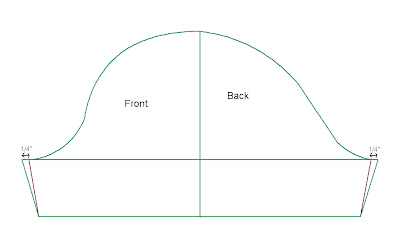 Sew up the new sleeve block and attach to the bodice. Check the centre alignment. If it is still off a little, then reduce the ease again by another 0.25" (1/4") on both ends, as above, and try again.


Disclaimer:
The 2 reasons described above aren't the only ones to fix a misaligned centre line. But I've found that they are the commonest when fitting a child's sleeve because small children's arms are much less defined with muscle/bulk.


The Importance of Sufficient Ease

There are 2 areas of the sleeve where ease is necessary - at the bicep and on the sleeve cap.

Let's discuss the bicep ease first. Remember that there really should be a bicep ease of at least 0.5" total. Otherwise, you will find the sleeve very tight across the bicep when the arm is raised. 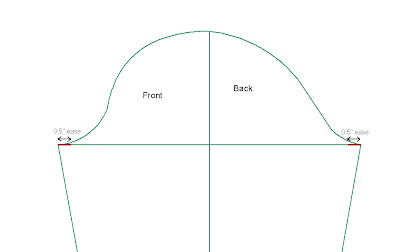 If you lower the depth of scye even more (let's say 2"), then add ease to the bicep by the same amount. 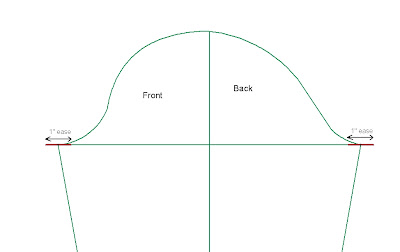 After this, redraw the seam on the upper arm to curve in until a point somewhere in the middle of the upper arm. 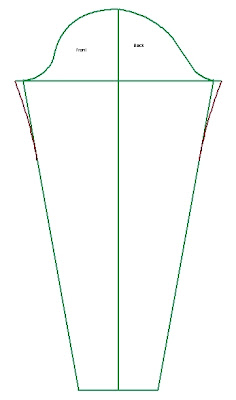 Sometimes it won't look and feel too tight when the arms are hanging down by the side. But when the arm is raised, the problem is much more obvious, and very uncomfortable. The fabric pulls at the armpit and wrinkles form at there. 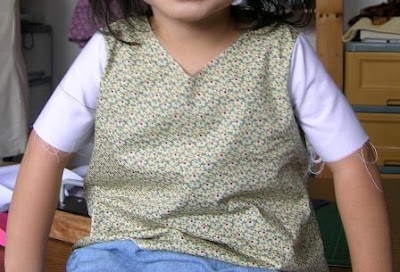 looks sort of okay when arms are down... 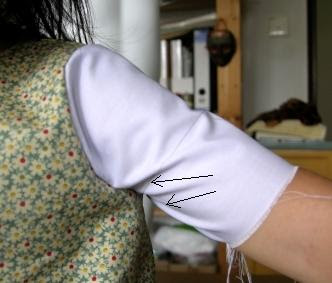 ...but look what happens when arms are raised.
To reduce and eliminate the wrinkles, redraft the sleeve, adding more ease to the bicep (0.25" at a time) on either side, as described above. To prevent yourself always redrafting as you work out the sufficient amount of ease to add on, make sure you cut a big seam allowance (about 1" width) for the entire sleeve. Then it's only a matter of removing the sleeve and redoing the underarm seam to accommodate the additional ease to the bicep. 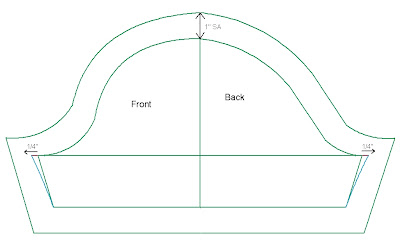 Now let's move on to the sleeve cap ease. Ease at the cap allow the fabric to lie smoothly and comfortable over the rounded part of the arm which makes up the shoulder/arm ball and socket joint. On adults, sometimes accommodation must be made for the presence of muscle development there as well, so more than normal ease should be added. On children, however, you have a relatively simple task of just adding enough ease to fit nicely over the ball joint. As mentioned in the earlier post, for a standard set-in sleeve, the amount of ease should really be no more than 1" maximum, divided (unequally is ok) between the front and back sleeve cap.

If there is insufficient ease, the fabric at the cap will strain over the ball joint (black arrows), causing the sleeve to ride up the arm and create wrinkles running upwards from the underarm seam (blue arrows). 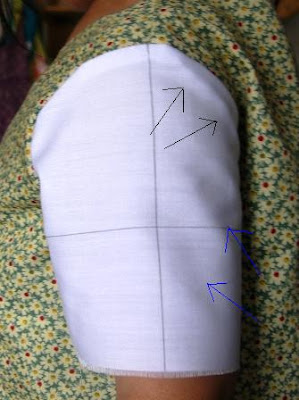 In the picture above, the problem occurs only at the back cap. A mirror result will develop if there is insufficient ease in the front cap. To create a smoother fit over the ball joint and reduce or eliminate the wrinkles, redraw the sleeve cap for more ease where the problem mainly is ,front or back (red lines). 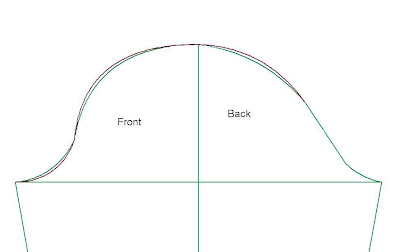 In the process of working out the best amount of ease, there might very well be a lot of doing and undoing, forwarding and backwarding. This is normal. But please don't be deterred. Just keep at it and the satisfaction you get when it turns out just right is quite worth it...because it will fit well and wear comfortably!


Coming up next - how to adapt the basic sleeve block for different sleeve types.

Daljeet
I started sewing at 9 years old. Yes, I was that child who cut old table cloths to make floral printed dresses for her stuffed animals. Two decades later, I quit a steady career in teaching to start my own business in the apparel industry. It's been a couple more decades and I can't seem to stop (yes, I have tried). So with a sense of joyous resignation, I continue to create custom clothing and patterns, and find time to teach drafting and sewing at my studio and online.

It is always a treat to get a comment! Thanks for yours :) 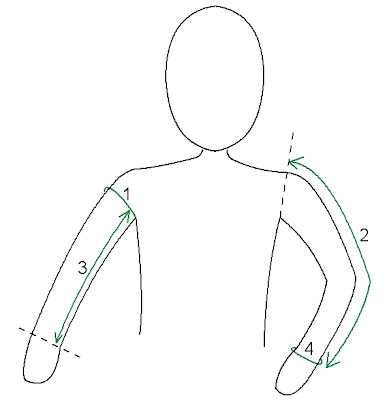 The fifth installment in the drafting series is all about drafting the basic sleeve block. And it is written by me(!) as a guest blogger for the series. I've reproduced the post below (with kind permission) for you my very own readers :)


There are many seemingly different methods to draft a basic sleeve block. Although the practical aspects (steps, procedures) may differ, the objectives of each step is constant, no matter the how. But admittedly, some methods are easier to follow than others. Old school tailors and dressmakers would take only 2 or 3 measurement points and rely on instinct to draw out the sleeve cap and armscye, free-handing the curves about as often as they use French curves.The cutters on Savile Row all do it that way still, and I read somewhere that straight/square rulers are off limits to the apprentice cutter because nowhere on the human body is to be found a right angle! But of course, it takes years to go from apprentice to pro on The Row. We, (un)… 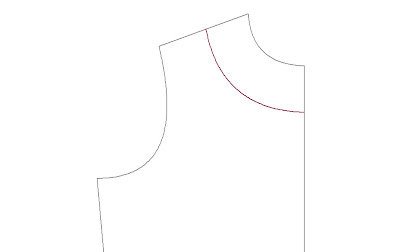 To me, necklines are the unsung heroes in drafting and clothing design. A neckline is a very simple thing to change up, and each modification can very dramatically, or subtly, create a whole new look to the same dress/blouse pattern. As I said, a neckline is a very easy thing to change. You just draw a new style line, literally.Following from the sloper draft shown by LiEr in the early posts, your basic bodice block has a round-neck, or jewel, neckline. You can change this to any number of different necklines by the end of this tutorial, I think!

But before we talk about how to change a neckline, I need to explain to you about facings. A neckline facing is a piece of fabric that is sewn to neckline edge in order to retain the shape and to create a neat finish at the neckline. There are other ways to finish the neckline edge, like binding and overlocking (as a decorative element also). But to me, using a facing guarantees a ver… 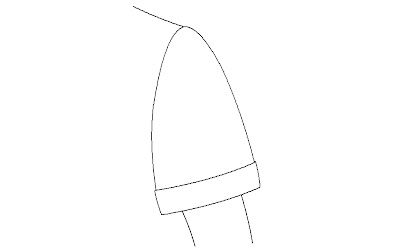 Drafting Part III - Adapting a Basic Sleeve for Other Styles

Now that you've learned how to draft and fit a basic sleeve block, you can use it to draft all types of sleeves! In this post, I'm going to show you how to adapt the sleeve block to create 4 different styles of sleeves; roll-up, gathered, puff, and bell. In some places on the internet, drafting books and on commercial patterns, different names are used for the various styles, but the ones I've used are sufficiently descriptive to limit future confusion. Also, I'm only going to show how to adapt the pattern on a short sleeve block.

Like the name implies, this is a sleeve with a roll-up band at the bottom of the sleeve (or the sleeve hem).


Take your short basic sleeve block and draw a reference line above the hem line, according to the width of your desired band. In the example, a width of 3/4" (three… 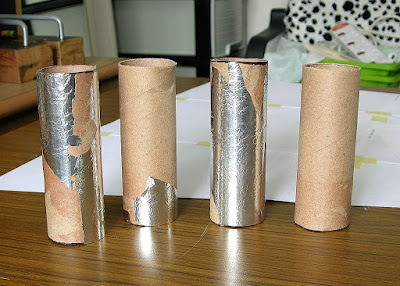 Make no mistake - I hate serger thread! They shred and split and fly here and there when one is trying to thread the serger. BLACK serger thread is the worst! Black attracts a lot of static cling and the thread shreds and splits even more than the other colours :(

That said, I still use it for some projects that really require it...like sewing up seams on jersey knits.

The problem, as many of you are familiar, is that your store will only have the exact matching colour in a jumbo spool - and chances are that it won't fit onto your little home serger anyway!

So what to do (short of buying 4 separate spools)?

Some places/books will tell you to wind the thread onto bobbins. But you quickly run out, often in mid serge, and then have to rewind constantly. Not ideal for large projects.
Here is what I do...

Get yourself 4 inner cardboard tubes.

I cut the long tube of a used roll of tin foil - can't you tell? You can also just use 4 tubes f… 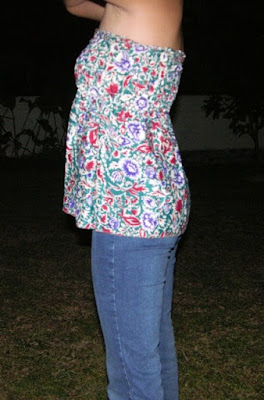 I have made a resolution to make a new post EVERYDAY (let's see how long that will last :p). In order to do that, I will post about current as well as old completed projects, maybe even a sewing story, or just pictures that appeal to me...

Today's offering is a tutorial...of sorts...

When I was pregnant last year, I was constantly hot and sweaty (the weather here was NO help) and was uncomfortable in anything that had sleeves or not made from light-weight cotton. Not feeling particularly energetic enough to make a proper maternity outfit, I remembered a top I had made the previous year that would fit my needs nicely.


It was too small (OF COURSE) to fit my expanded rib cage and ballooning belly, so I made this cheery version out of cotton.

I wore it a good 70% of the duration of the pregnancy and will willingly wear it still cos it's not a maternity blouse in the strictest sense.

Here is the drafting how-to:
measure your bust circumference and multiply this by 1.5.divide that by …